When I met Kirsty I got the feeling straight away that she was going to be a laid back bride. They had planned a romantic wedding with a ceremony at Merchant Venturers Hall in Clifton finishing off with a reception at The Riverstation. She had decided to go for make-up for just herself and her mum. She wanted a relaxed morning and I was going to do my damnedest to ensure she got her wish.

Kirsty is from Yeovil and so were most of her family so they booked rooms at The Bristol Hotel for getting ready. When I arrived at the hotel Kirsty and her parents were waiting for the lift following a good hearty breakfast in the hotel. A girl after my own heart, I simply do not function without food in the morning!!!

I started on Kirsty’s mum Brenda. We had plenty of time and so it was nice to make it a relaxing experience. Having had a trial with Brenda a few weeks prior we knew what we were doing so she relaxed back in the big comfy chair with a cushion behind her head and enjoyed a bit of pampering. Brenda was wearing a white dress with beautiful bright blue flowers and a baby blue jacket. Her outfit complimented the electric blue bridesmaid dresses perfectly. We went for mauve as an eyeshadow colour, mainly because this was a colour she was comfortable with and it worked well to bring out the colour in her eyes and dress.

Kirsty finished having her hair done by Amy Summers who’s a self employed hair dresser from Yeovil. She did a great job Kirsty’s hair was absolutely stunning! I then took over the beautifying! Due to her hair being done she couldn’t recline quite as much as her mum but we had a good go at making her as comfortable as possible which this photo shows…

Kirsty wanted a classic bridal look, natural but effective. I went for quite neutral tones on her eyes, a very soft peachy base colour with browns and a light grey coming in from the outer corners. I used a pinky blush on her cheeks to add definition.

She had expressed that she was a little rubbish at remembering to reapply make-up so I gave her a look that should last all day and used Benetint to add colour to her lips that would last a good few hours with a small amount of gloss over the top. 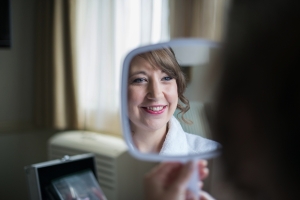 During the morning I offered to hang around whilst Kirsty got into her dress. She had her stunning gown made for her by Kaye James from Crewkerne, it was so beautiful and suited Kirsty down to the ground. In her words ‘she couldn’t have asked for more’! Her dress had a lace up back and I know from experience that they’re not always as easy to do as you might expect. Her mum had assured me that she was happy to do it but just as I was about to walk out the door I heard my name being called and I dropped my bags and got stuck in. It really is a 2 man job getting it done right so me and her mum worked like a well oiled machine and she was strapped in, in no time (sorry Kirsty I hope we didn’t pull you about too much :)) 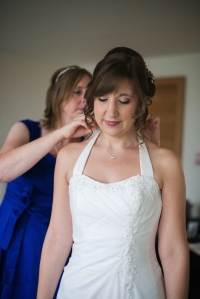 Once she was in and happy I got on my way and wished her well for a wonderful wedding day. Since the wedding I’ve been in touch with Kirsty and asked her if there was anyone she would like me to credit and so here are a few people she has mentioned…

Florist was Corrinda Wakefield-Wylde who was the sister of their jeweller Nicholas Wylde who made Kirsty’s engagement ring, their wedding rings and a necklace Chris gave to Kirsty on the day. Kirsty said ‘They were all pieces commissioned by us and made to our budget, so it doesn’t cost as much as people might think and you get something personal to you.’

The car was from a local father and son business who are farmers and in their spare time fix up old cars and hire them out for weddings – Triggol’s Vintage Cars. Well worth a visit to select your car as you get to see them all. Apparently they do a lot of TV work with their cars such as Downton Abbey and Mr Selfridge to name but two!

Kirsty would like to say a special thanks to Gary Aldwell at the Merchant Venturers hall, she said ‘ he was brilliant, he quietly just ensured everything went to plan’. Finally the band… Peter Mouse’s House Band, a local Bristol band who played something for everyone, they had the kids and Grandmas’s dancing and everyone in between!

A big congratulations to Kirsty and Chris!

L’Oreal Infallible Foundation a mix of 15 and 125

Benetint on her lips and a Mac gloss

I used a total of 8 different shades on her eyes, including light peaches and pinks from Body Shop shimmer cubes sets 06 and 23, and the aubergine from set 23 and the grey from set 06.

Diorshow was used on her lashes for a fuller fluttery look.